The School of Theatre Excellence is Birmingham’s leading stage school, performing arts school and theatre school all rolled into one!

SOTE Birmingham was established in 2012. Taking stage school training to a new level, we wanted to be a centre of excellence bringing West End standard musical theatre training to the UK’s second city.

In August 2016 we launched SOTE Foundation Course in Dance and Musical Theatre, which has been an incredible success. Students aged 18+ train with us Monday-Thursday 8.45am-4.45pm in Birmingham. This intensive 30 week course is designed to equip students with a level of acting, singing and dancing ready for drama school entry. Our vision to establish a 3 year Musical Theatre Diploma Course in Birmingham will soon become a reality.

We offer a FREE TASTER for each new student under 15, this is to ensure that the school is right for you.

We look forward to welcoming you to SOTE.

West End standard training in the heart of the Midlands

SOTE Birmingham opened in 2012 and offers musical theatre training for ages 9-18. Students study an all round musical theatre package consisting of musical theatre ballet, jazz, tap, choral singing and acting.  Alongside group sessions students receive regular 1 to 1 singing lessons. Performance classes also offer students the opportunity to perform solos in front of their peer group, parents and industry professionals. Many students come to SOTE Birmingham with no previous experience, which we very much encourage, to receive a level of training akin to a full time stage school. On Sundays we have four groups of talented students who train with us for four hours. Sundays run from 10am to 2.20pm & 2.30pm to 7pm
Autumn term begins on Sunday 24th April.

Our aim has always been to put The Midlands back on the map. The school has established a fantastic reputation within the industry, not only with leading casting directors (from theatre, television and film) but also leading West End Colleges, where many of our students have gone on to continue their training.

SOTE Birmingham were pleased to have two students in the original West End cast of the brand new Andrew Lloyd Webber musical School of Rock. In 2014 we supplied all the children for Miracle on 34th Street at the Alexandra Theatre and many of our students appeared in A Christmas Carol at The Rep. In 2015 we were asked to supply students for Cinderella at the Barclaycard Arena and in 2016 students appeared in Chitty Chitty Bang Bang at the Birmingham Hippodrome.  At Christmas 2017 our students performed in Peter Pan at the Birmingham Arena and then transferred with the show to Wembley Arena. In 2018 twenty eight of our students were chosen to appear in Evita at the Birmingham Hippodrome, as well as the UK tour of Nativity the Musical and in Macbeth at the RSC. This christmas you may have seen our students on tour in Elf, The Musical at Liverpool, Glasgow Arena, Wembley & Dublin Arena.

On Sunday 29th April 2018 SOTE produced a Variety Performance in aid of Molly Olly’s Wishes Charity at the New Alexandra Theatre. We were thrilled to have West End star Gary Wilmott and comedy legend Jimmy Cricket along with local comedian Nipper Thomas appearing. The gala raised over £10,500 for this great children’s charity. In June 2016 SOTE produced a Variety Performance in aid of Birmingham Children’s Hospital Charity at the New Alexandra Theatre. Our reputation secured such West End stars as Marti Webb and Christopher Howard along with local comedians Barbara Nice and Steve Day were also thrilled to appear. We raised £10,500 for The Birmingham Children’s Hospital Charity. Due to the success of our Gala we aim to put one on bi-annually raising money for local Midland charities.  In 2015 a similar event we produced raised £7,800 for The Brain Tumour Charity.

The School and students are assessed each year. We invite in a leading specialist Children’s Casting Director, Verity Naughton and Head of Dance David Greenall. Students all have the opportunity to perform solo songs and monologues in front of the panel and receive professional feedback.

Have a look at our facebook page for footage of our weekly classes.

SOTE Sundays are based at:

Parking:
There is free parking on Sundays outside the studios. 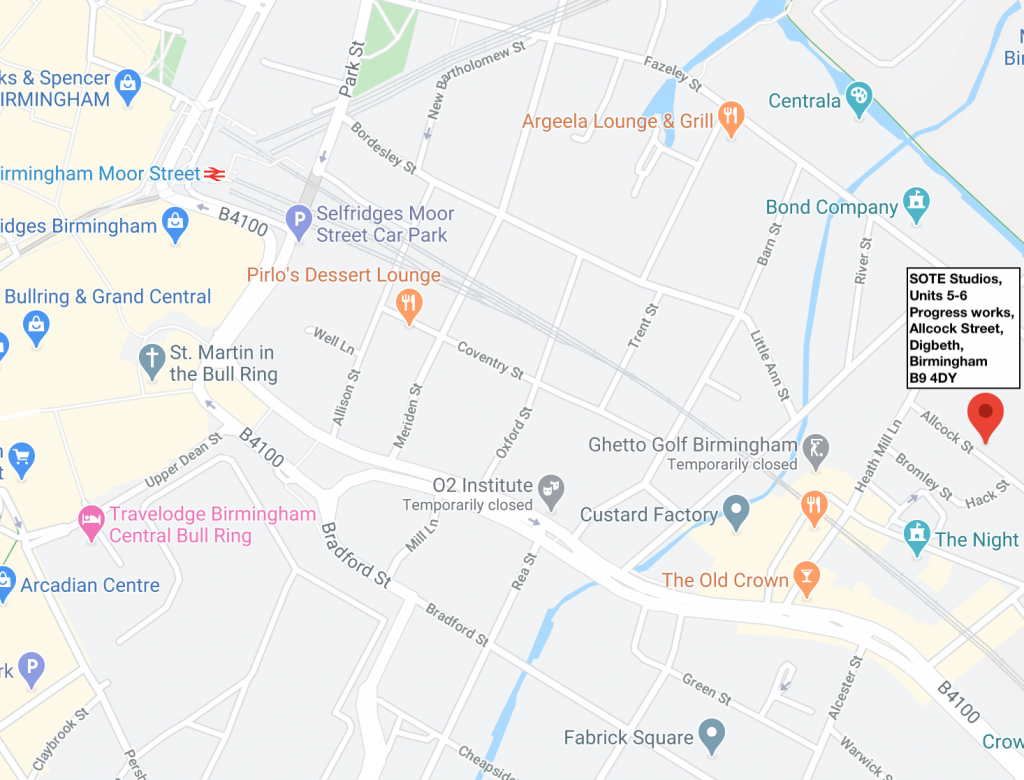 The School of Theatre Excellence is The Midlands leading stage school, performing arts school and theatre school all rolled into one!

Students study an all round musical theatre package consisting of musical theatre ballet, jazz, choral singing and acting.  Within the MT package students receive 1 to 1 singing lessons, with regular performance classes where students perform solo songs in front of their group, or on many occasions to the whole school and parents.  Many students come to SOTE with no previous experience, which we very much encourage.

SOTE Saturdays is designed for nurturing talented students who have an enthusiasm for acting, singing & dancing and love to perform.  To join we encourage students to take a FREE TASTER SESSION where you will train with our current students. At the end of the day we will have a short chat with both you and your parents to discuss everything that you have learnt and what you would like to achieve by joining the school.

Our next FREE TASTER SESSION is on Saturday 23rd April contact us for more details.

We are pleased to have students appear in professional theatre & TV productions. Students from SOTE have appeared in:

Our Saturday school is situated at:

Public Transport:
The studios are 10 minutes walk from the main Birmingham train stations

Parking:
There is onstreet meter parking and carparks around Allcock Street.

Through our agency SOTEagency we have been able to establish links with production companies and casting agents on both a local and national level. Student West End credits include:

As well as credits in Television, Film and in Radio.

We are so proud of their successes.

To contact us regarding using our students in your production email info@soteagency.co.uk or call our agency office on 01273 457734